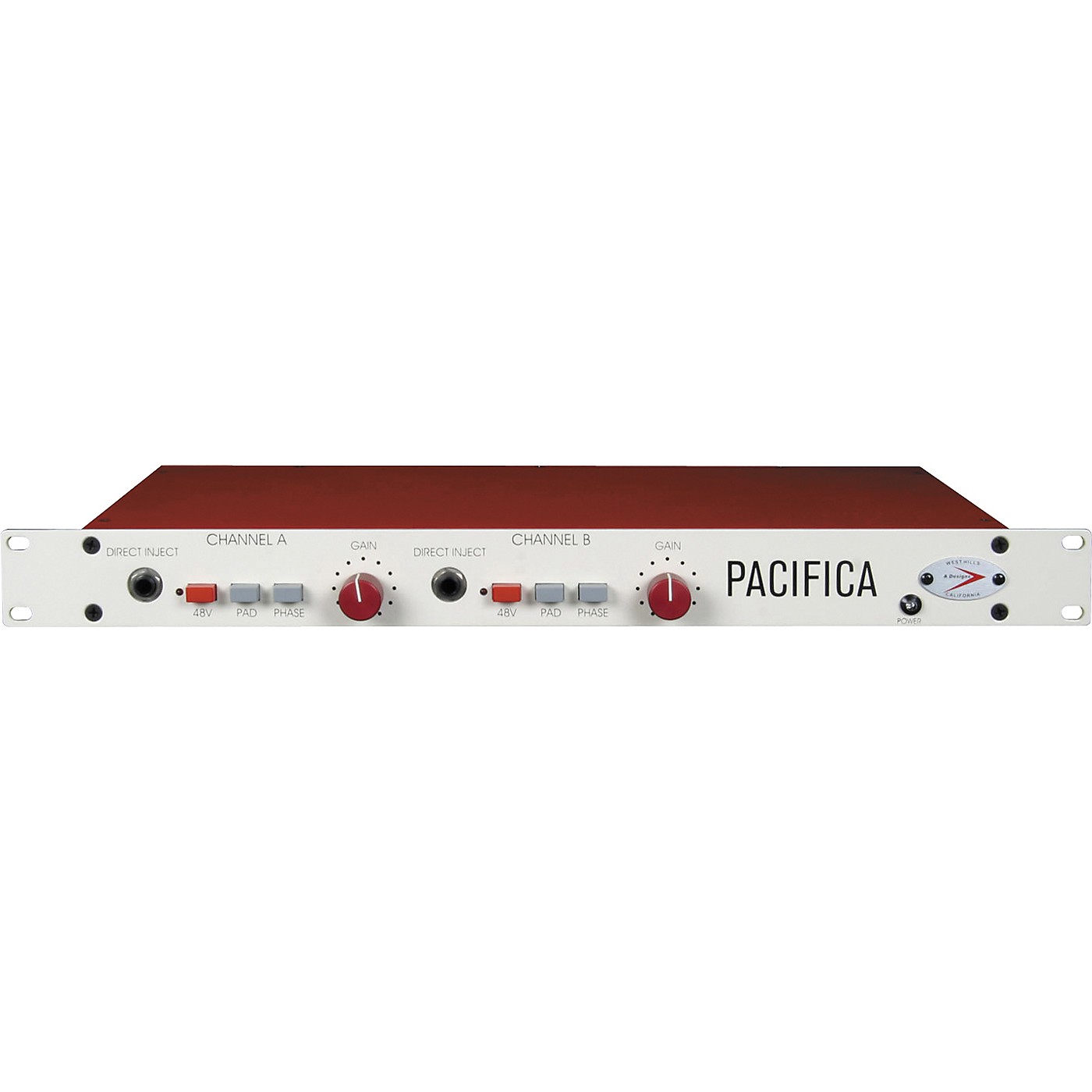 Consider the A-Designs Pacifica solid state stereo microphone preamplifier if you're ready for your first really good preamp--or the last one you may...Click To Read More About This Product

A TEC Award-nominated preamp that wins the hearts of all who hear it.

Consider the A-Designs Pacifica solid state stereo microphone preamplifier if you're ready for your first really good preamp--or the last one you may ever need.

How often in life do you encounter someone or something that no one has anything bad to say about? We haven't met that "someone" yet, but the "something" is the A Designs Audio Pacifica solid state, dual-channel preamp. This Tec Award nominated beauty has won more praise from engineers and producers than just about any other preamp to hit the streets in a long, long time.

The Sound of the '70s Reborn

The 1970s was a time of great music and great change in pro audio--a golden age if you will. The introduction of "solid state" electronics led to an explosion in development and a very different sound than the tube gear of previous decades. The recording console in a high-end 1970s studio was likely a Neve, API, or Quad Eight. These companies set the standards for audio quality -- with a unique sound firmly imprinted on the popular recordings of the era. Even though the Quad Eight mysteriously faded from view, many engineers firmly believe that the Quad eight Ventura, Coronado, and Pacifica consoles were the very best sounding of the big three. Boston's "More Than a Feeling" and Pink Floyd's The Wall were mixed on a Quad Eight!

But rather than just crank out another clone, A Designs Audio's Peter Montessi and audio designer Jon Erickson (who spent years bringing vintage gear back to life for LA studios), added their own touch to bring the preamps of the glory days to serve the present-day needs of the recording world. The result is the Pacifica, a fabulous-sounding preamp the captures the heart and soul of the California and takes the LA sound a step further.

Custom Transformers, the Key to a Big Punchy Sound

In solid-state preamp design, the key to a big punchy sound rests in the input and output transformers. (That's where you get what is known as the "big iron" sound of the '70s). To ensure top-quality sound, A Designs has their transformers custom-built by Tom Reichenbach of Cine-Mag, whose lineage extends back the days when his father Ed built transformers for Altec-Lansing in the '40s. (Ed Reichenbach was also one of the designers of the Quad Eight console on which the Pacifica is based.) Not only are the transformer hand-made, they're also ear-made" by Jon and Peter, who won't okay a transformer design until they get exactly the sound they're looking for. After extensive listening tests and redesign after redesign, they finally found the sound they were looking for. And herein is the most important distinction of the A Designs Pacifica. While its name, look, and inspiration was taken from the Quad Eight Pacifica, the A designs Audio Pacifica has a sound all its own, and one that top producers and engineers feel that they could make an entire record with (that's pretty rare in this business).

Aside from the custom wound transformers, which, by the way, the instrument inputs are routed directly into for the fullest possible sound, the Pacifica boasts a frequency range of 9Hz-101kHz. (Another reason for its great sound. Input impedance is 600 ohm at 400Hz and the gain range is a remarkable 72dB -- so break out those ribbon mics and go to town. Since the focus of A Designs is sound quality first and foremost, you're not paying for bells and whistles and extra devices in the circuit path that can degrade sound. Features are kept to the necessary minimum, which include polarity reverse, a -20dB pad (which sounds nearly invisible, +48V phantom power with indicator LED, and balanced XLR I/O.

Ted Perlman, renowned Grammy-winning producer, musician, arranger, engineer, and programmer, has a resume that reads like a who's who of popular music. His credits include Bob Dylan, Chicago, Burt Bacharach, Elton John, Dave Mason, Brian Wilson, Carole King, Albert Hammond, Jr. (The Strokes), Desmond Child, Young M.C., Dolly Parton, and, well, the list goes on. Ted was kind enough to provide us with his go-to recording vocal chain as well as his choice for guitar and percussion. Here it is, straight from Ted Perlman himself:

I just finished up a CD on the most famous Pilipino singer in the world - Imelda Papin. Her signal chains are exactly the same.

"Well all of the drums for Terry Bozzio's Jazz trio were recorded with all A Designs Audio solid state preamps. For drum overheads I used Shure KSM32 condenser mics (#270141) into a Pacifica to a Manley Variable Mu Limiter Compressor (#620908); for kick drums, AKG D112s (#271161) into A designs Pacificas. (I prefer the Shure Beta 52 (#270267) for kick but they were pre-mounted inside Terry's (Bozzio) kick drums. Actually I have used the Shure KSM32 into Pacifica combo on tons of great drummers, including Terry Bozzio
Victor Bisetti (Los Lobos), Gregg Bissonette (Santana, David Lee Roth), and Pat Mastelotto (King Crimson, Mister Mister, The Rembrandts)."

Note: for more information about individual units in the signal chain, enter the Item ID# into our search box.


*Check out Dave Pearlman Mics at pearlmanmicrophones.com (Dave also has quite an impressive resume as a recording engineer and owner of Rotund Rascal Recording Studio.

Once you hear what the Pacifica can do, you'll never settle for anything less. Order now and experience it for yourself.