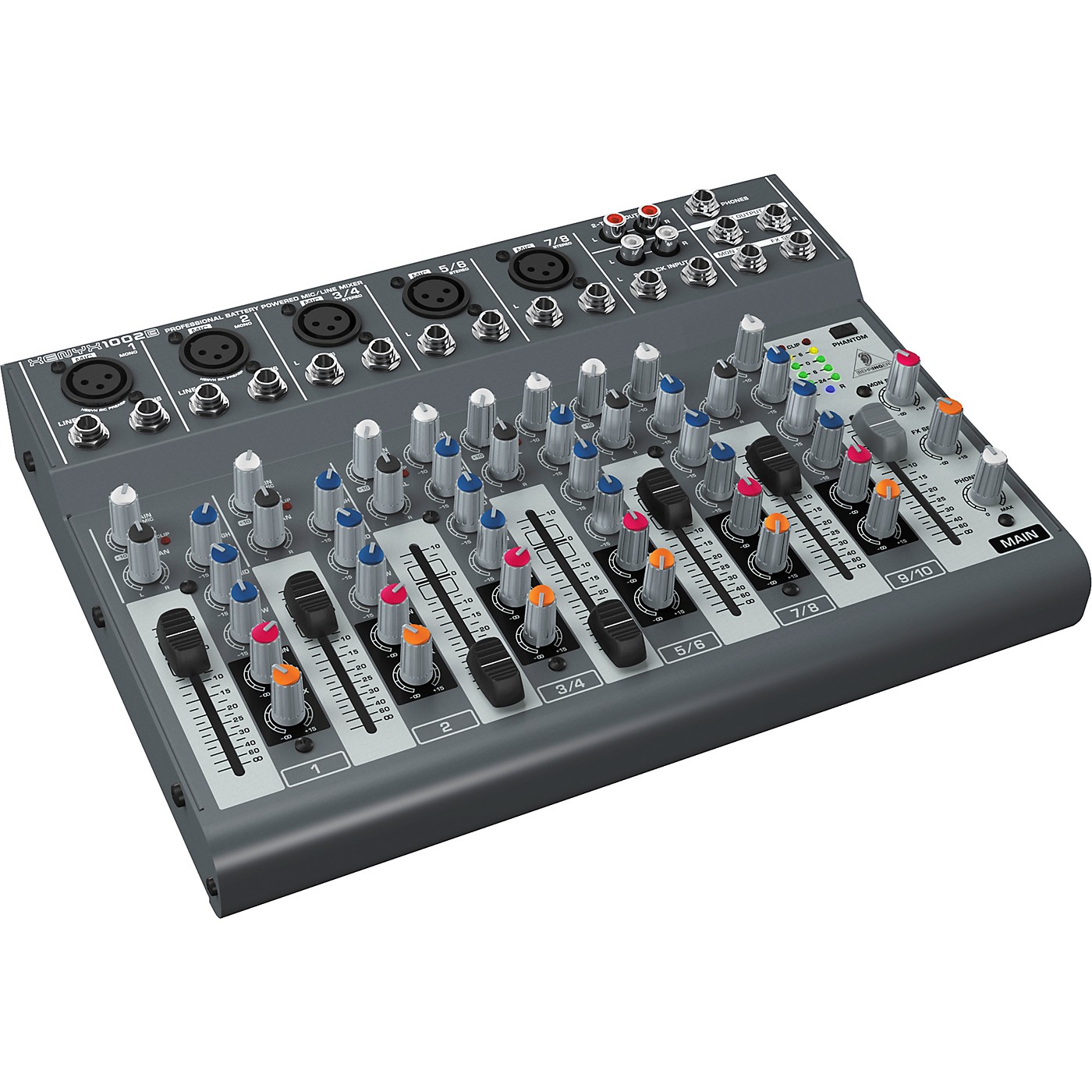 The compact Behringer XENYX 1002B 5-Channel Mixer has Behringer's highly musical 3-band British-style EQ, plus an FX and monitor send for each channe...Click To Read More About This Product

The compact Behringer XENYX 1002B 5-Channel Mixer has Behringer's highly musical 3-band British-style EQ, plus an FX and monitor send for each channel, making it a must-have for any audio toolkit.

State-of-the-Art Goes Portable
Whether you plug it into the wall or power it via 9V batteries, the Behringer XENYX 1002B comes equipped with many of the features you've come to expect from Behringer's larger mixers. For example, XENYX mic preamps for amazing sound quality, phantom power for use with professional-grade condenser mics, 2-Track inputs and outputs, and 60mm faders. The 4 stereo channels accept left/right or mono 1/4" TRS/TR inputs, and 3 of them also accommodate microphones (with separate Trim controls).

The Behringer XENYX 1002B represents a significant milestone in the development of mixer technology. Equipped with Behringer's premium XENYX mic preamps, this compact mixer can easily hold its own against the most expensive stand-alone mic preamps, both in terms of sound quality and available headroom. XENYX preamps offer a staggering 130 dB of dynamic range, with a bandwidth that extends from below 10 Hz to well above 200 kHz. XENYX mic pres provide such transparent, crystal-clear performance you just might think someone upgraded your mics.

Sublimely musical British EQ
The British consoles of the 1960s and '70s changed the sound of rock and roll-without them the British Invasion might not have happened. Those legendary mixing desks soon became the envy of engineers and producers all over the world. The 3-band EQ on the Behringer XENYX 1002B mixer is based on that very same circuitry, allowing you to imbue signals with incredible warmth and detailed musical character. Even when applied generously, these equalizers exhibit sweet forgiveness and superb audio quality.

Applications and value
Don't let the small footprint fool you-the Behringer XENYX 1002B is built to the same exacting standards as Behringer's larger format XENYX mixers and is housed in an equally rugged steel chassis. It is the ideal choice for keyboardists who need to mix down multiple instruments or sound modules for live or recording applications. Singers who perform with backing tracks, as well as instrumentalist/singers (acoustic guitar or piano bar, for example) find the Behringer XENYX 1002B indispensable for patching into house systems.

Field Operation
Its compact size and flexible input scheme also make it the natural choice of sports announcers for calling play-by-play game action. Likewise, radio and TV reporters especially like the Behringer XENYX 1002B mixer for its ease-of-use, remarkable fidelity and rugged reliability. And the 9 V battery option allows newscasters and correspondents to use the 1002B in remote locations where power is hard to come by. (Two 9 V alkaline batteries are required for normal operation, three for phantom power).

From its state-of-the-art XENYX mic preamps to its highly musical British-style EQ and user-friendly layout, the Behringer XENYX 1002B mixer is a solid leader for value and sonic integrity in its class.