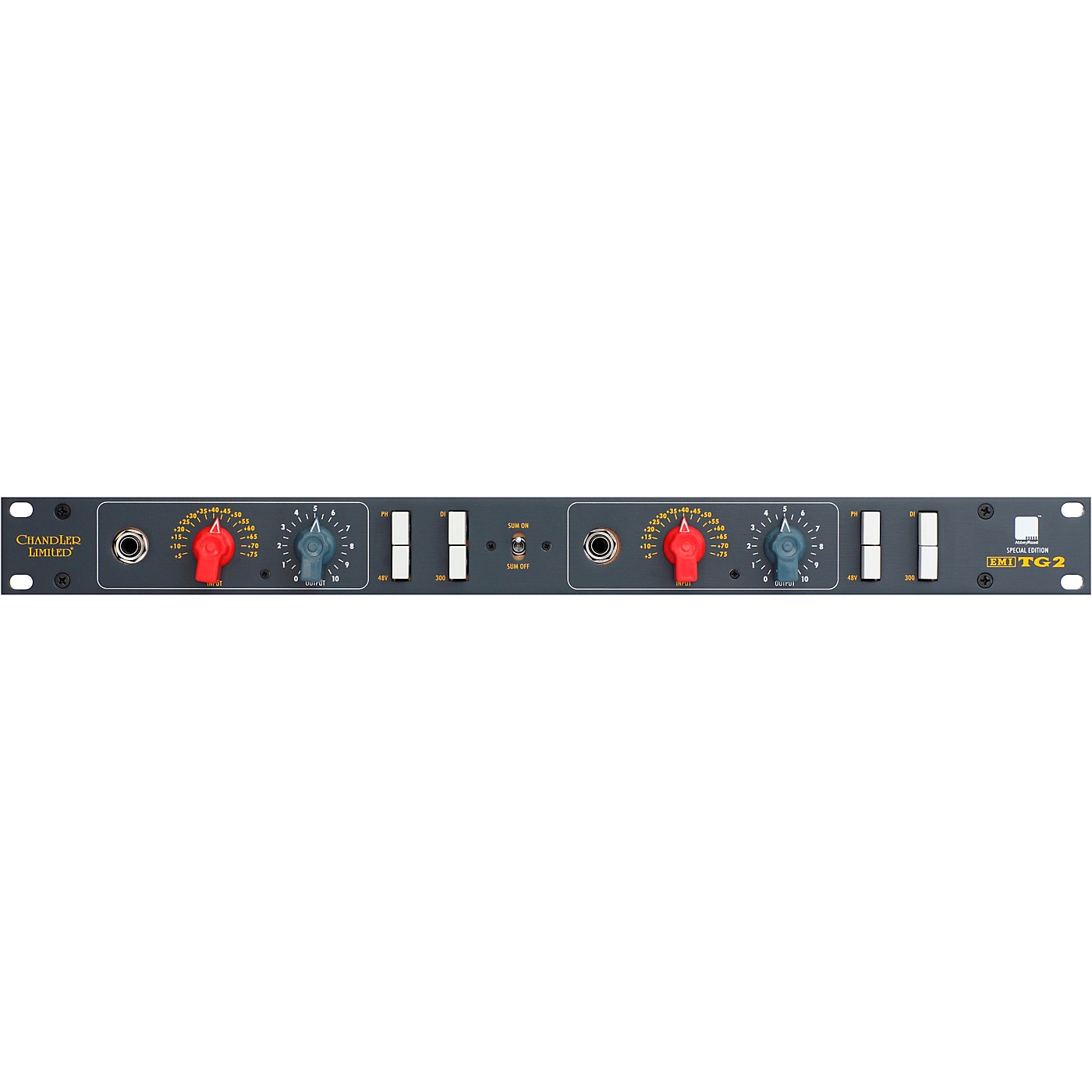 The sound of the EMI TG12428 mic preamp was used on many famous recordings done at Abbey Road including The Beatles' Abbey Road and Pink Floyd's Dark...Click To Read More About This Product

A re-creation of the rare EMI TG12428 preamp used on EMI/Abbey Road recordings in the late '60s and early '70s.

The sound of the EMI TG12428 mic preamp was used on many famous recordings done at Abbey Road including The Beatles' Abbey Road and Pink Floyd's Dark Side of the Moon. The amplifiers were also used in many EMI circuits of the time. Chandler's version was remade from original design notes and circuit board drawings provided by Abbey Road and EMI to ensure extreme authenticity.

This pre-amp features the same discrete transformer-balanced amplifiers as the TG series limiter and offers a creamy, smooth tone with a surprisingly open, clear top end (dare we say nicer than Neve?). The sound, as explained by many users, has the Neve "warmth" and punch, but with a "nicer" expanded top end. In fact, the unit does have a small rise in its top end frequency response and some warmth-inducing distortion, which contributes to its sound.

User Reviews
"Thanks for the support and for such a great pre/DI (TG2). My other pres have been feeling distinctly 'un-loved' since this baby arrived! After spending a week with the TG2, I now understand what all the talk has been about. The TG2 delivers the sound I have been searching for - a 'creamy' sounding mid- to high-frequency emphasis with punch."
- Anthony Lim

"Just a quick (belated) note to say thank you for the TG2 - wow! Spectacular sounding pre. I ran our bass player direct using the TG2 and the sound was amazing - crystal clear with full, deep low freq response. I'll be cutting vocal tracks with Barry tomorrow; I'm looking forward to hearing your pre with his U47."
- John Merchant, Engineer- Bee Gees

"I wasn't really in the market for a new pre amp, but based on the quality of Chandler Limited's other products I asked for a demo unit. I have an assortment of what I considered to be the best mic pres ever made, but the sound I heard coming through the TG2 absolutely floored me. I bought the demo unit and ordered another two channels as well (this within one hour of first plugging it in). It has become my first choice for almost every application and I can't imagine making a record without it."
- Jerry Finn, Producer- Green Day, Blink 182

The Chandler TG-2 nails the sound of '60s and '70s Abbey Road. Join the pros who use Chandler daily to make hits. Order yours today.