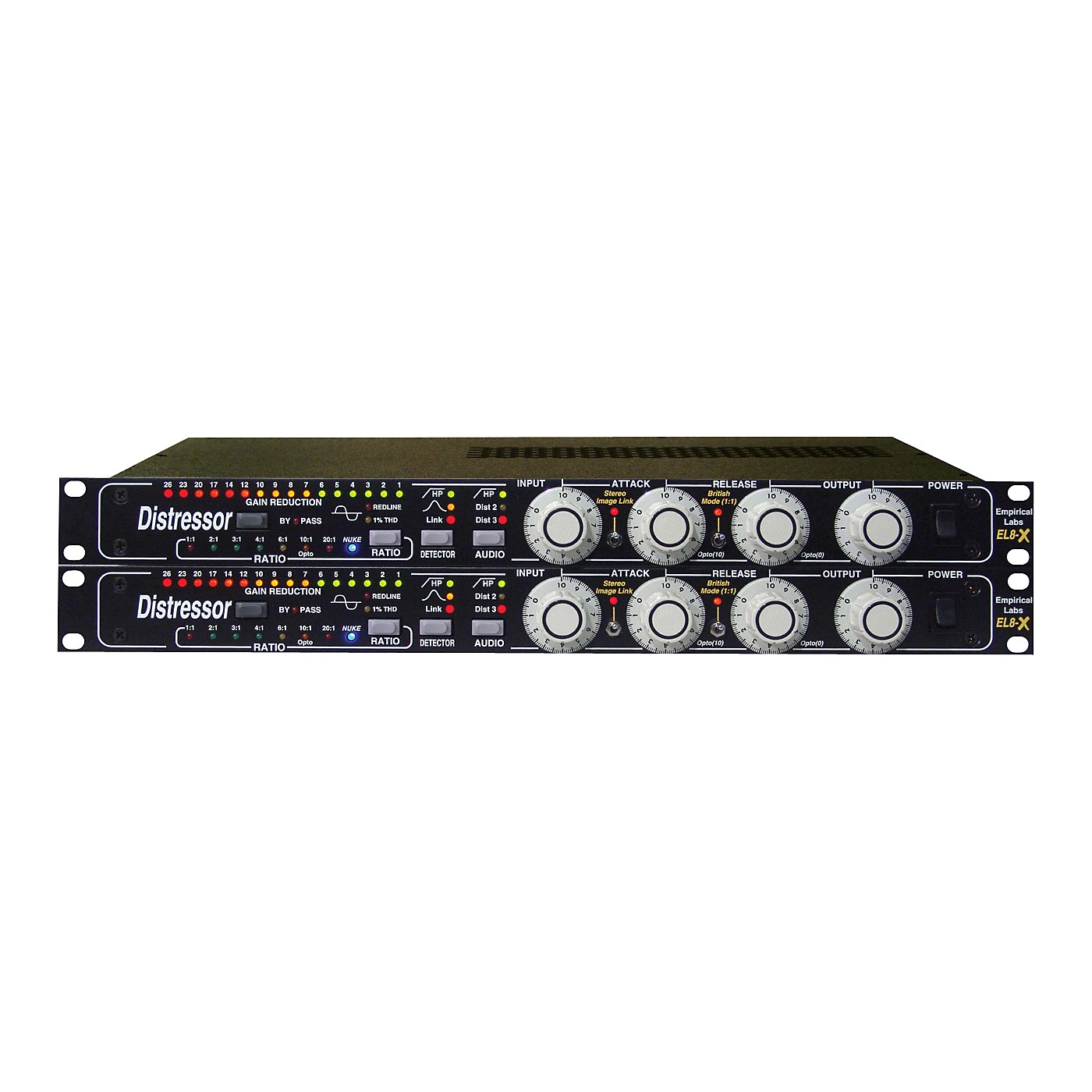 The EL8X Distressor from Empirical Labs is an automatic gain (or volume) control device (AGC in engineering terms) designed for pro audio (music) app...Click To Read More About This Product

The EL8X Distressor from Empirical Labs is an automatic gain (or volume) control device (AGC in engineering terms) designed for pro audio (music) applications. Basically, it electronically controls the volume of just about any source in a very pleasing, and "musical" manner - adding fullness, intelligibility, and especially in the Distressor's case - excitement. This type of device is often called a "limiter" or "compressor" by audio industry people. Its most probable uses will be in recording studios, live sound situations, movie sound production, and radio broadcast production.

Unlike most analog compressor/limiters the EL8X Distressor is a digitally controlled audio device and actually incorporates several products into one by utilizing digital controls to switch totally different circuits in and out. Years of beta testing and redesign went into the Distressor as is the case with all Empirical Labs products.

The EL8X Distressor "British Mode"
The original concept of the "British Mode" came from an unusual setting on the classic UREI LN1176 limiter. The unit was designed to have only four ratios, each ratio being engaged by selecting one of four buttons. However, as early as 1980 (or before), renegade recording engineers, always on the lookout for something a little more "over the top", found that you could make all four buttons stay "in" if you pressed them just right. What resulted was a very, very aggressive sound that had some elements of the units 20:1 ratio, but with an unusual knee and new envelope shape. Somewhere along the line, someone called it a "British Mode" and the name has stuck. It is also called "all buttons in" and some other intuitive names.

Empirical Labs gives the Distressor the advantage of being able to apply this "aggressive" nature not only to the British ratio (1:1) but also to all the ratios since a separate switch is installed, which can be enabled with any ratio. One should keep in mind however, that an attack below 3 or 4 is required to maintain the LN1176 character. If you go above an attack of 3 you will also incur a rise in some grunge (distortion) and see the THD indicator lights come on a lot more. The Distressor will no longer behave smoothly, nor like an 1176.


How to use the new British Mode Option for the first time
Put the unit in the 1:1 ratio and turn on the British Mode Switch (flip it up and the LED should be lit). That enables it. To sound like the 1176 the only constraint is to keep the attack well under 4 on the Distressors - their attack can go much longer than the 1176. Now you will find that the unit has a new attitude! The attack and release will generally be more aggressive and the unit will get in and out of the way very quickly. Interestingly, the unit will be slightly less colored when not compressing.

Tips
Use this ratio to "skim" peaks. This means that most of the time it may not be doing anything, but when it does "hit" the signal, it will smoothly push back the signal and then get right out of the way again. If you are hitting the Gain Reduction all the time with the British mode on, you are going to be really "squashing" the signal. On the other hand, the Distressor will sound fairly subtle when compressing all the time in 2:1 mode, especially with a slower attack (>6).

Tricks
¢ Vocals: This is a great final compression during mixdown. When not working it is very transparent, but when a vocal pops out and hits the compression, the British mode will get in and out of there quickly and smoothly. When you are really compressing a lot, breaths and background noises will become very loud (pushed up). There is not much you can do with this except gate before compression maybe or, mute or erase the noises and breaths out that you don't want to hear. Remember that breaths are natural and can add a lot of excitement sometimes, so don't gate or erase them by default. If you can, back up a vocal track before you start trying to punch out breaths and noises etc.

Stereo Image Linking for the Distressor
The original Distressor stereo link implementation used a summing and phase detection method which allowed stereo image shifting. "Image shifting" occurs when the inter-channel balance (the relative volume between Left and Right channels) changes during compression. Although known for its phase correction, and its "thickening" on open room mics and other stereo sources, this approach has sometimes been a problem on stereo program material where the producer/engineers want to maintain absolute left/right balance at all times.

With the new "Stereo Image Link" option, the Distressor user now has three link options - the original "phase" link, the new Image Link and the combination of the two, phase and image linking. This has never before been offered on any compressors or limiters. There can be very slight differences in the metering between the two units. Due to the high resolution of the Distressor's metering, 1/10th dB can make an LED on one unit go on or off earlier than the other unit's. Also, don't readjust knob alignment - the output pots especially. They are often offset around "0" to allow for "dead spots" at the lower extremes.

The Who
Tom Lord Alge

If you could only buy one pro-quality compressor, make it a Distressor.