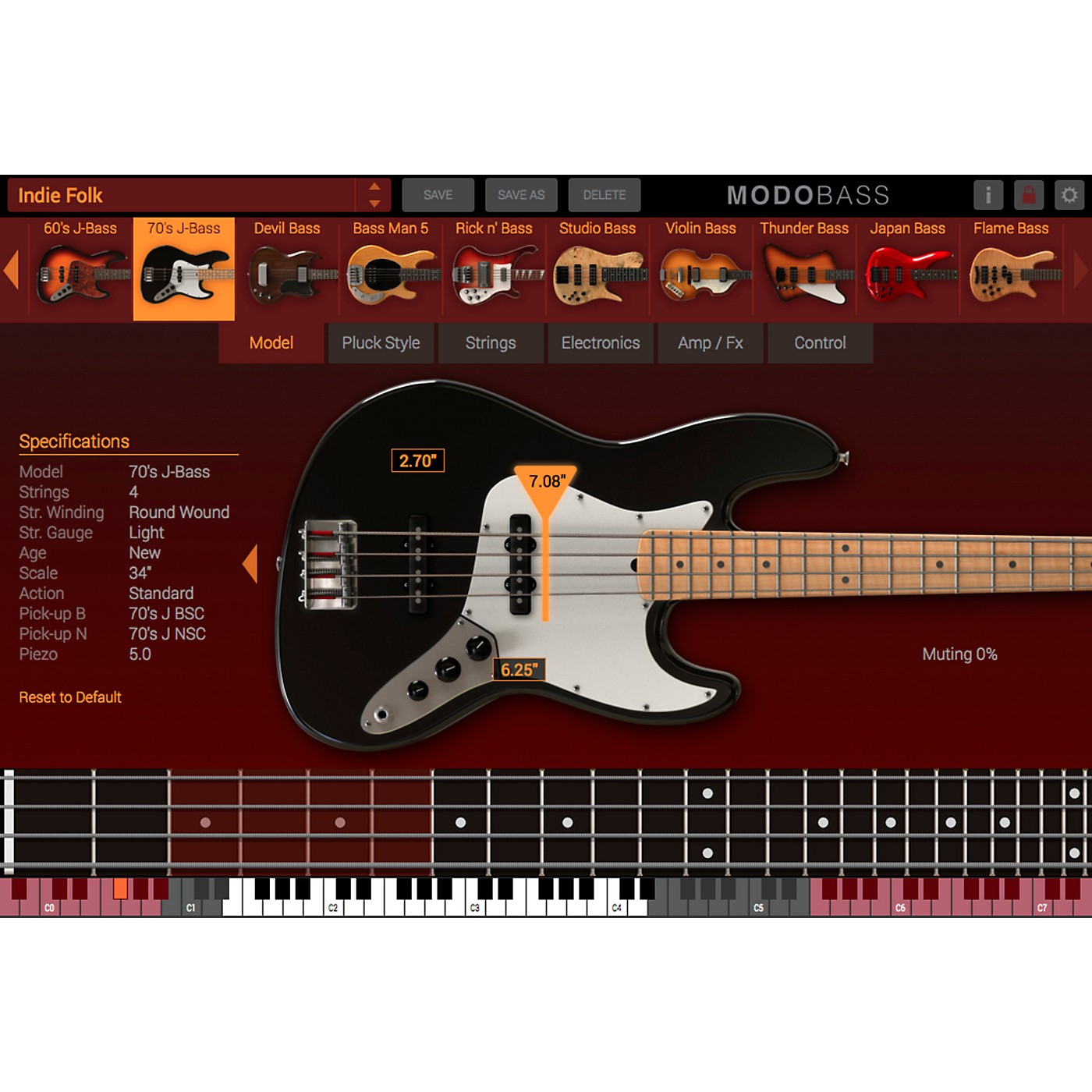 As a producer, you want the best possible bass sound you can get. You want realism, credibility and authenticity that delivers the most accurate and ...Click To Read More About This Product

Realistic performance for your bass tracks.

As a producer, you want the best possible bass sound you can get. You want realism, credibility and authenticity that delivers the most accurate and inspiring performance. Sometimes you just can’t hire the right bass player, and some virtual instruments out there can leave you flat and uninspired.

MODO BASS is the industry’s first true physically modeled instrument from the leader in analog modeling technology. Eight years in the making and developed in collaboration with one of Europe’s oldest universities, MODO BASS is a completely new breed of instrument that delivers the best of both worlds: the realism and sound of an instrument being played by a master musician and the convenience of a plug-in virtual instrument.

But MODO BASS isn’t a virtual instrument by definition—it’s a completely new technology that redefines realism from a computer-based instrument. MODO BASS is the first technology of its kind that models the entire process of playing bass.

Every component that contributes to the unique tonal properties of a bass player playing an instrument has been modeled, and the effects of each component on the other ones — the interactions between each tone variable — has been recreated to give you a dynamic, living breathing and ever-changing performance. You see, traditional virtual instruments are sample-based, meaning that sound is produced by triggering recorded samples of instruments. MODO BASS isn’t a sample-based instrument, but rather a completely new technology where sound is generated by recreating the physical properties of a real instrument — everything that makes an instrument create sound is physically modeled and sound is synthesized in real time.

Each string’s acoustic behavior is determined by its physical parameters, as well modeling the action of the player as a nonlinear physical interaction with certain areas on the string surface and the interaction of the string with fretboard, body and pick-ups of the instrument. Then using IK’s cutting edge analog modeling expertise, the amp and effects rig of the electric bass is added to the sound chain. All of this gives MODO BASS the ability to create sound in real time based on the construction and components of the bass combined with the player technique, finesse and the ever-changing dynamic interactions between the two. In short, MODO BASS brings — for the first time — ever-changing, hyper-realistic, living-breathing bass sound and performance to the world of virtual instruments. And since it doesn’t use samples, MODO BASS has an extremely small memory footprint.

MODO BASS gives you 14 iconic basses that span the history of music — 14 basses that define virtually every style and every genre of music recorded with an electric bass. Each bass model was chosen for its particular timbre and wood tone, and every detail of the instrument’s performance has been meticulously modeled and recreated.

The new “Metal” is particularly suitable for use with the new drop A feature, which allows the lowest note to be tuned from low B to low A, recreating the typical tone loved so much by metalheads. Metal’s variable scale reaches a length of 37 inches allowing for a very steady and solid sound which, albeit excellent on its own, can literally blow you out of the water when used with our Ampeg® SVX 2 collection for AmpliTube. Give it a try!

The “Imperial” gives you an expensive, creamy and rich sound that is ideal for funk, pop, latin-pop, fusion, jazz-rock, alt-rock and many more genres for which you might require a very round, resonant bass tone.

Since MODO BASS synthesizes sound in real time, you can modify your instrument and playing approach to get completely unique sounds. In fact, there are so many customization options available that there’s really no bass sound that you can’t get — the configuration and tone possibilities are virtually limitless. Once you’ve selected the bass you want to use, it’s time to get to work customizing your instrument to fit your music

Finger — The Finger option selects the finger style of bass playing, one of the most common ways to bring out inspiring bass tones. With it, you can change which fingers you play with and how much force you use on the strings.

Slap — This mode recreates the act of “slapping” and “pulling” the bass strings with the thumb and fingers. Since there are no samples being triggered for each style, every stroke will sound slightly different, just like a real bass player.

Pick — Get major transient attack on the string with a pick. Here you can choose the physical thickness of the pick, plus the picking style, downstroke or alternating. Each strike of the plectrum produces a unique sound.

Mute — You can also apply “muting” techniques to any playing style, another premier in software instruments. The mute control lets you add just the right amount of damping of the strings producing the human-touch element of bass technique.

In addition to the style of playing, you can also adjust “where” you play on the strings. Playing closer to the bridge provides a more pronounced upper frequency tone, while playing closer to the neck accentuates more low and mid frequencies delivering a “rounder” tone. You can also select the type of sustain and ring of the individual notes.

Different strings provide different sounds and tonal qualities. In MODO BASS, you can customize your string choice and choose the type of setup used on the bass.

First, you can choose the actual number of strings on all models (4, 5 or 6) to determine the note scale range of the bass. In MODO BASS you can easily turn any 4 string model into a 5 or 6 string bass at a click of a mouse. In addition, with the “Drop” function, you can extend the range of any model even further. The DROP option tunes the lowest string one tone lower, bringing it from E to D (or from B to A in the case of a 5 or 6 string setup). Besides extending the range of the bass, this “loosens” the string giving it a particular behavior and tone. DROP tuning is typical in Hard Rock and Metal.

Modo Bass - strings
Then can choose the gauge of the string set which affects timbre and sustain, the age of the strings which changes the relative “brightness” of the tone, plus the physical construction of the strings (round wound, flat wound, etc.) which changes the type of “slide noise” introduced when moving up and down the neck. In addition to the string-specific parameters, you can change the bass’ physical scale length as well as the action, or physical distance between the strings and the fretboard. Changing the action changes the timbre and amount of the fret noise when playing — a lower action produces slightly more fret noise when played agressively, just like on a real bass.

Electronics
The electronics section is where you customize the pickups and wiring of the bass. This section lets you experiment in real time with different types of bass pickups, the position of each one (each bass can have up to 2 pickups, even if the bass model originally comes with just one), and you can tweak the frequency response parameters of each. There’s even a piezo pickup control that lets you blend an under-bridge mounted piezo signal with your pickup signal.

Start with the stock pickup or pickups for each bass model and set the volume balance independently for each. Want a different pickup in the neck position? No problem. There are 24 individual pickup models to choose from, each with its own tonal characteristics and personality. You can also freely move the pickups around in the pickup area providing you with virtually limitless options. Experiment with different pickups, different pickup positions and different playing positions all at the same time. With MODO BASS, you can create combinations that would be virtually impossible to accomplish without a lot of solder and wiring adjustments!

Adjust the overall pickup output with the tone control, just like the tone control on the physical bass. You can switch the electronics from Passive to Active, and doing so gives you access to an additional parametric EQ that lets you fine-tune your tone for the perfect balance.

With MODO BASS, you have full control over the signal path and get 7 bass effect stomp box effects and two classic bass amplifiers. Choose from an Octaver, Distortion, Chorus, Compressor, Delay, Envelope Filter or Graphic EQ. Each stomp box has been derived from the world-class models in AmpliTube Custom Shop. Each stomp effect gives you full control over the effect applied to the signal, parameter adjustment and overall output volume into the next effect. Using IK’s advanced non-linear modeling technology, the pedalboard not only provides ultra accurate modeling of the desired effect, but also models the interactions of the effects in the chain on each other effect in the chain and gives you real-world performance and a realism simply not found in other software instruments.

Choose from a classic all-tube amplifier and 1x15 cab, or you can choose a powerhouse solid-state model with a 4x10 cab. Each amp gives you full control over gain structure, EQ (with mid-frequency adjustment on the tube amp), and additional fine-tuning options with a graphic EQ. There is also a global bypass feature that allows you to route the bass signal from MODO BASS into another amp effects modeling suite like AmpliTube Custom Shop, where there’s a whole new world of sonic options available for bass tone shaping and effects waiting for you.

So if you’re looking to bring your bass tracks to life, to truly put a performance into your next production, put MODO BASS to work for you. You’ll be amazed by the realism.