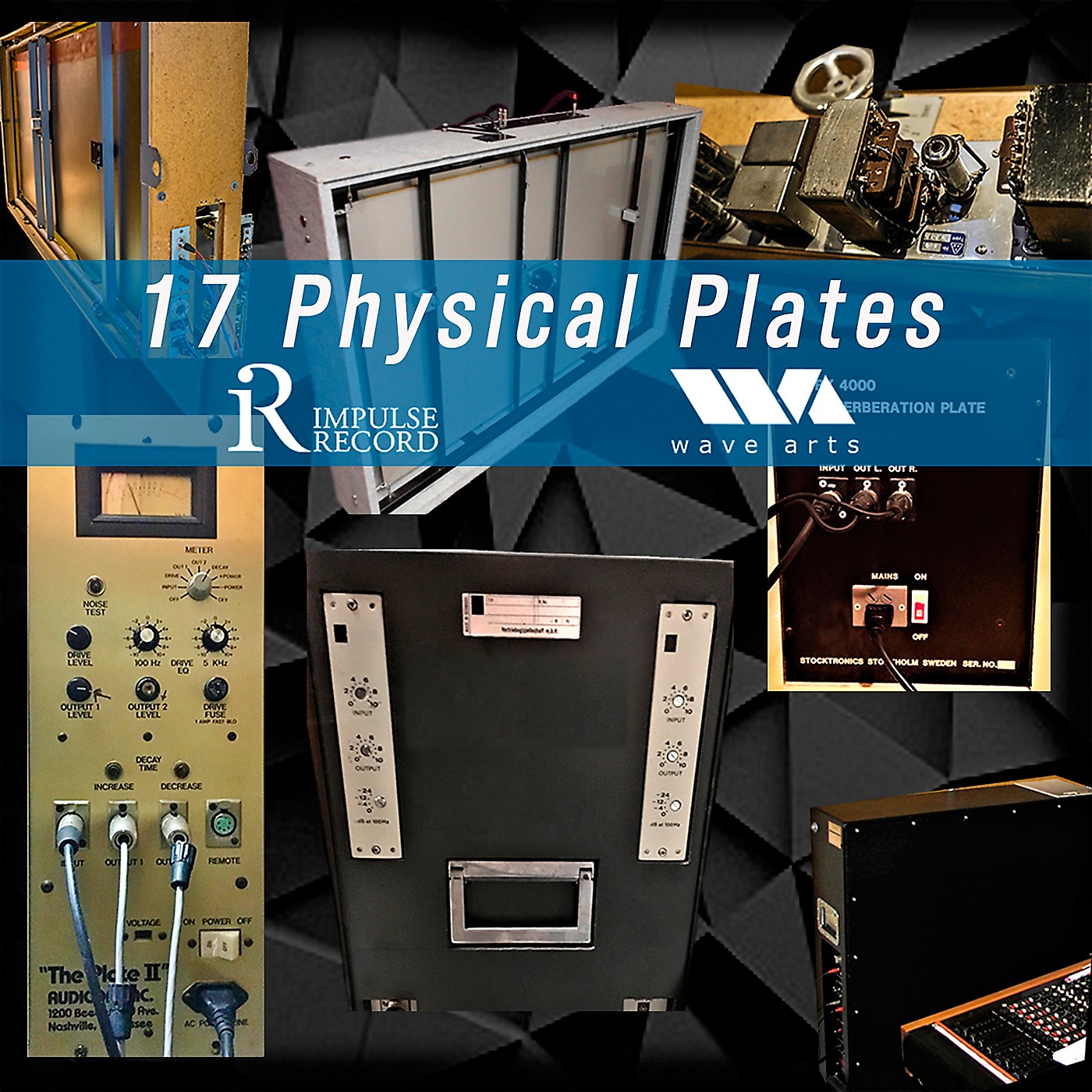 Every plate varies according to how it’s been tuned, so there are virtually no two plates exactly alike, even when made by the same company. Then, gi...Click To Read More About This Product

Every plate varies according to how it’s been tuned, so there are virtually no two plates exactly alike, even when made by the same company. Then, given years of use and in some cases having been stored or reconditioned and re-tuned, they develop further unique attributes. In addition, the condition of drivers, pickups, the addition of upgrades made to a plate unit, along with the audio paths to and from each piece of gear, can and obviously do play a heavy role in their final sound and impulse response capture.

What Files Are Included

With the physical plates, the truest and most accurate representation of the plates have been sampled. This was a massive project with engineers and studios from around the globe. Knowing the potential of the project and moving forward with studios that were well regarded was very important for a number of reasons. They know their gear, its behaviors and what works best.
Because time was critical, the “sweet” spots of each plate was recorded. In simple terms, for some plates, because dampers were working “somewhat” but still had a beautiful sound, there were only a handful of samples and impulse captures that took place and for others, a good number more samples were captured with a wide array of impulse response files. There is a huge selection of plates and DSPs and there really is something for everyone in the mix.

Aud (Audicon) - middle of the road - somewhat bright, similar in overall size to their West German plate competition, with a steel plate thickness a little under the 1/64 of an inch used by the Germans, yielding a brighter sound.
Brick – some variations with models, but the 4’ X 4’ plate was typical.  For being half the size of the 140, sounds quite good.  The Brick is not as warm, but is very useful when wanting a rich plate sound and to bring out a particular sound such as a snare.
Eplates (ECOPLATESTM trademark of Studio Technoliges, Inc) - tend to be brighter and a little more metallic sounding.  Useful to bringing certain production elements out in the mix when you need it to cut through.  These units were a little smaller than the German 140 plates.
German 140s - For many, the 140s are viewed as king of the hill for a number of reasons. They were the first and came to market in the late 1950s. They tend to be a little warmer, tend to replicate, as they were originally designed, the sound of a concert hall and with limited EQing can for the most part, more readily replicate a dark, bright or a warm sounding room, etc.  The need to scoop low end EQ might be useful when applying to certain instruments and voices, to avoid the bass multiplier effect.  There are beautiful sounding files in every 140 model sampled - try them all along with very cool hybrid impulses that really are a solid edition to anyone’s convolution library!
Lawson - tends to be brighter and a bump in the lower mids tends to warm them up.  This unit was designed and built by Gene Lawson who continues to make microphones today at his shop in Nashville, TN.  His microphones are well regarded and his tenure in the business is remarkable.
Stocktronics manufactured in Sweden.  Only a little over 250 of these units made in their entirety and are very rare. Impulse Record was lucky to get these impulse response files recorded from Finland  The original owner/designer Lars Liljeryd, talks about the Stocktronics plate and made these comments on the manufacturing process.  “The specially manufactured stainless steel used in the Stocktronics 4000 was totally unique with it’s 0.3 mm thickness and extremely low “pile-height”. Thus the steel sheets were 2-D stretched in a stretching bench at the steel manufacturer and thus became very flat, before cutting it to size. This two-dimensional stretching process also cold-forged the steel so it became even harder, thus producing proportionally longer reverberation times at higher frequencies than any steel quality used by the competition. Therefore it had a very special sounding reverb, liked by many and disliked by some, as it sounded a bit synthetic. It however had a very high resonant density so it could cope extremely well with high frequency impulsive sounds and still sounded smooth.”
German 240 - darker sounding.  Weighing 148 lbs with dimensions of 1’ X 2’ X 2’.  Some say better on shorter settings and for sound sources like drums. Originally designed as a way to make the original 140 (4’ X 8’) in a smaller and lighter box. It really was a technological feat for its time.  Both versions of the 240s sampled, tend to be darker in tone and sound as most do, when searching online with user comments.  They use a gold foil plate and are a hybrid between the original large 140 plate and early analog to digital rack mount and smaller floor units, although the 240 is totally analog.  The thickness of the gold foil plate is 18 microns (very thin like aluminum foil - note that
average human hair thickness is between 40 - 50 microns)
FEATURES