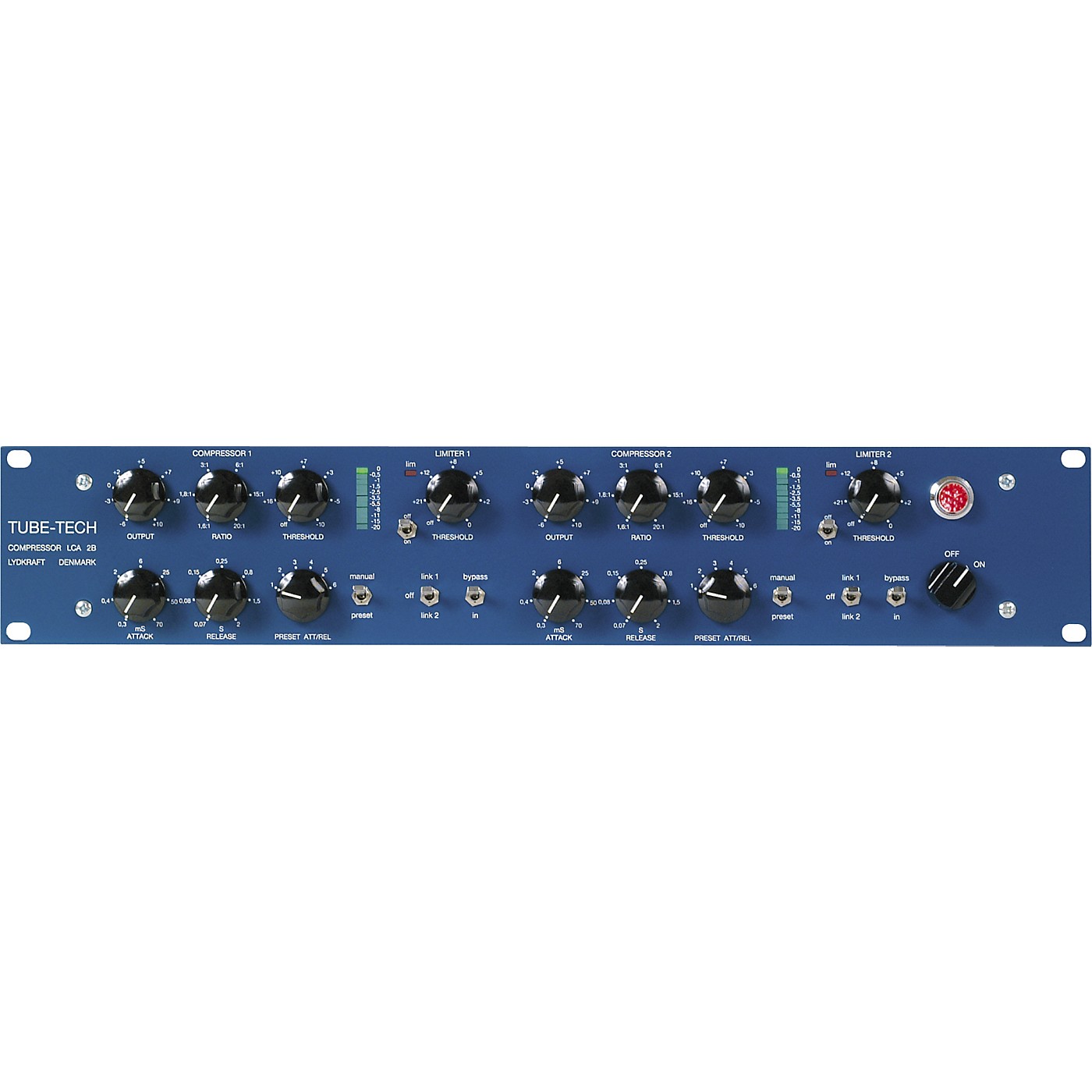 The two-channel Tube-Tech LCA-2B offers all-tube compression with the added flexibility an independent compressor and limiter per channel. It's perfe...Click To Read More About This Product

The two-channel Tube-Tech LCA-2B offers all-tube compression with the added flexibility an independent compressor and limiter per channel. It's perfect for drum overheads, stereo room mics, stereo guitar, bus compression, and just about any other stereo source you have in mind. You also have the option of inputting two mono sources, compressing on one while limiting on the other.

The rackmount Tube-Tech LCA 2B is a two-channel unit with an independent compressor and limiter per channel. The unit is all-tube based (except for the power supply and sidechain circuit). Output gain control is placed between the VCA and output stage. The VCA (1 dual triode) is placed between the input transformer and the output stage (2 dual triodes). The audio signal is picked up after the VCA and fed to the sidechain circuit.

The stereo compressor has six attack/release presets as well as manual control. The limiter attack/release is fixed and equipped with an on/off switch. The LED display is fed from the control amp. The limiter LED is fed from the limiter buffer. The audio path is fully symmetrical from input to output. Input and output have fully floating transformers. All DC voltages are stabilized, except the anode voltage for the output stage, which is only filtered.

The control signal from the compressor and limiter is combined and sent to the link switch and to the control amp, which feeds the VCA. The bi-directional link busses are accessible at two 1/4" stereo jack sockets on the rear panel. The channels can be linked together for stereo applications and also linked to other LCA 2B's via the two link busses and a standard stereo jack/jack cord. A switch (Link 1, Link 2) on the front panel selects which compressors are interconnected, and on which bus they are connected. If you select Link 1 on both channels, they will perform the same gain reduction. With several LCA 2B compressors in a rack, you can select which ones will work together. For example, by selecting LCA 2B #1, Ch. 1 on link 1; LCA 2B #2, Ch. 2 on link 1, and LCA 2B #3, Ch. 1 on link 1, they are now interconnected and will all act with the same compression. By interconnecting them in this fashion the unit that performs the most compression controls the others. It is also possible to have all the interconnected compressors control each other simultaneously.