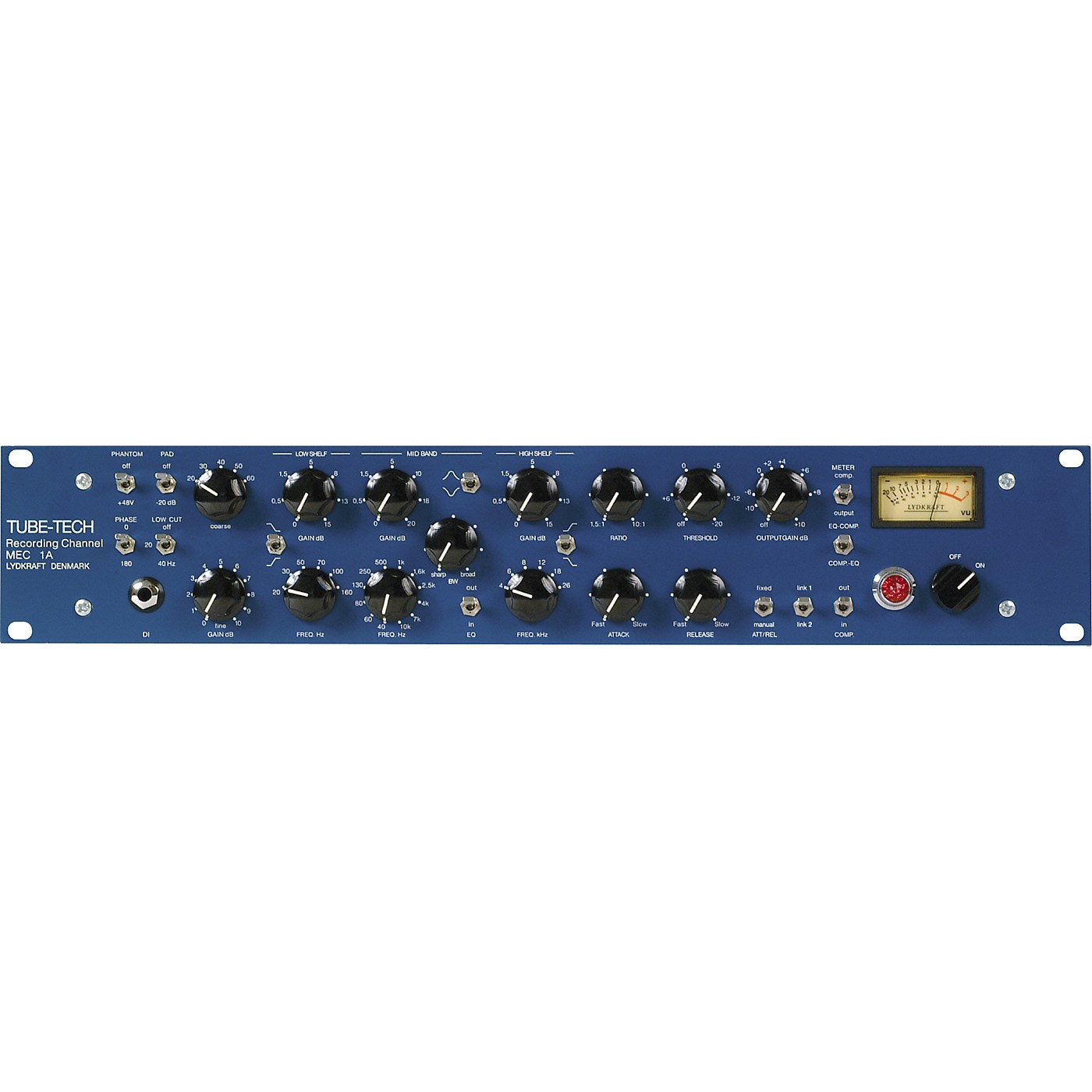 The rackmount Tube-Tech MEC 1A recording channel combines the MP 1A microphone and DI preamplifier, EQ 1A equalizer, and CL 1B optical compressor. It...Click To Read More About This Product

The rackmount Tube-Tech MEC 1A recording channel combines the MP 1A microphone and DI preamplifier, EQ 1A equalizer, and CL 1B optical compressor. It doesn't get any better than that baby! The MEC 1A is designed and hand crafted to deliver the warmth of vintage quality recordings with unrivaled accuracy, purity, and realism. You couldn't ask for a better front end for your DAW!

The microphone preamplifier consists of a microphone input transformer (with a static screen) with a step-up of +10 dB, two dual tube preamplifiers with two stepped gain switches, one with 10dB/step (coarse) and one 1dB/step (fine) giving a total gain range of +20dB to +70dB. The microphone input is provided with a switchable -20dB attenuation (PAD), switchable +48 V phantom-power and phase reverse. A highpass filter for the microphone and the DI input is switchable between off, 20 Hz and 40 Hz. For more information, check out the Tube-Tech MP 1A (# 182001)

The microphone input is capable of accepting levels of up to +6 dBU (1.55V) at 40 Hz without the PAD. With the PAD switched into the circuit, the MEC 1A can be used as a unity gain line amplifier accepting levels up to +26 dBU (15.5V) at 40 Hz. The high impedance DI input is unbalanced and placed in the circuit directly after the input transformer. The gain range for this input is +10dB to +60dB. When in use, the microphone input is disabled.

You'll love the sound of this EQ. It performs exactly as you would want a high-end EQ to. With minimal tweaking, you can add all of the punch, polish, and air you like to make your recordings stand out. The equalizer features low and high shelving filter with a gain range of +/- 15dB, each with 6 switchable frequencies and a band filter with a gain range of +/- 20dB, 12 switchable frequencies and a bandwidth control. The shelving and the bell filters are designed around a dual tube operational amplifier. The equalizer has a separate in/out switch. For more information, check out the Tube-Tech EQ 1A (# 182019)

An entire Tube-Tech signal chain—what's not to love? If you're looking for a top-tier vocal channel and you have the means, order it by all means!