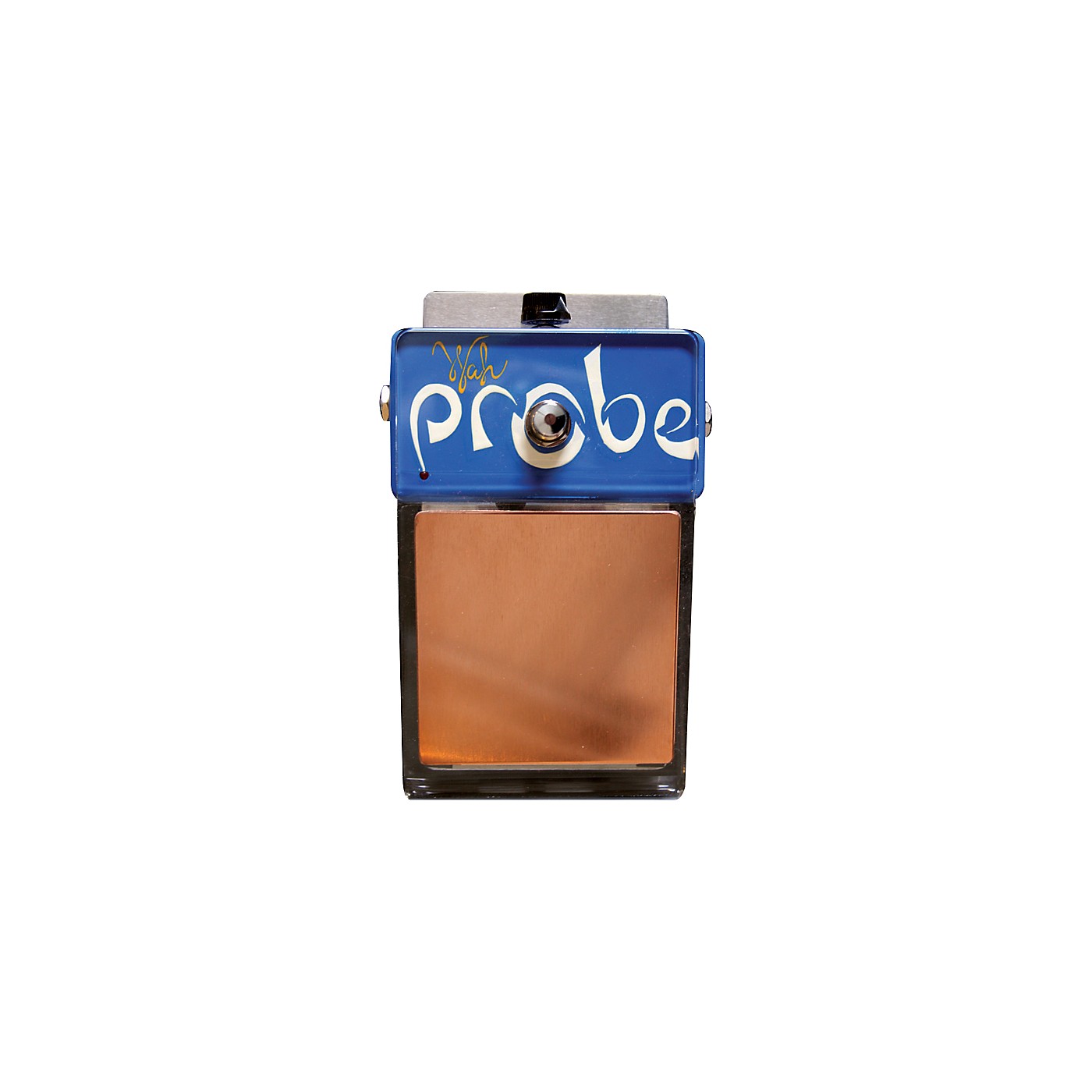 The Wah Probe by ZVex features a Theremin-style antenna controlling a wah, which gets brighter as your foot approaches. It also features a Super Hard...Click To Read More About This Product

A wah that holds a key to a new world of creativity.

The Wah Probe by ZVex features a Theremin-style antenna controlling a wah, which gets brighter as your foot approaches. It also features a Super Hard-On boost circuit in front of the wah, with a knob to set the exact level of boost for driving your wah sound. It can be turned up high enough to make the wah crack up a little for that "something's-gonna-blow" sound.

The probe circuit generates a small (one or two inch high) "bubble" of RF energy at about a million cycles per second above the copper plate. As your foot or hand (or any wet or metallic object, for that matter) approaches the copper plate, the RF field is disturbed and the circuit reacts by increasing the brightness of an LED, which drives a photoresistive cell and controls the wah circuit.

Adjustments:
The simplest one of these is the volume level of the "drive" knob. Just set it so that when you kick on the wah it's doing its stuff at the right intensity. It goes from slightly lower than the normal guitar volume to very loud when turned up all the way.

The next adjustment is the RF field screwdriver adjustment on the bottom of the pedal. If you turn it in the direction of the arrow (usually to the left for that one) it will make the probe circuit more sensitive and set the "bottom" setting of the wah higher and higher. It's best to hold the pedal completely upside down so that the cords are dangling away from the antenna, with your hand and arm completely away from the antenna, and strum your guitar's open strings (you probably have to have it on a stand or strapped on) thru the Wah Probe. Gently adjust the RF pot with a tiny screwdriver in the direction of the arrow until you hear the wah get to the level you'd like it to be when you are not putting your foot near it. There's a region where the sound of the guitar is kind of "muffled" and the wah kicks in after your foot gets near the pedal, which is how this unit is shipped. If you like the wah to be partway cocked into the lower wah region just park the adjustment right where you like it. As you get closer to the unit, it will wah higher.

The other adjustment is the LED current control. You can usually leave this one at exactly halfway. If you think the wah is too bright when your foot is all the way on it, just turn this control to the left to make it a little duller at the top end.

Battery:
The unit works well with any kind of nine-volt battery. Naturally, a nice alkaline cell will last quite a bit longer than a carbon-zinc one, but some people are completely sold on the sound of the higher voltage output from a carbon-zinc unit when it is brand new. To change the battery, unscrew the four screws on the underside of the painted box. Carefully lift out the old battery and replace it with a new one exactly as it was installed, with the clip toward the right as you look at the bottom when the plastic footpedal part is aiming toward you and the painted box is further away.

Note: Due to the nature of each hand-painted Wah Probe pedal, there may be a slight difference in design from the posted image.

It's unlike any wah you've ever played. Get one now!